I have held off writing a post about How I Make Bone Broth, because I’ve been pretty sure that when I make broth, I just throw bones in water and boil ’em. Doesn’t exactly seem recipe worthy. But then I post pictures of what is basically beef or chicken jello, and get comments suggesting that a lot of people don’t have the same results. 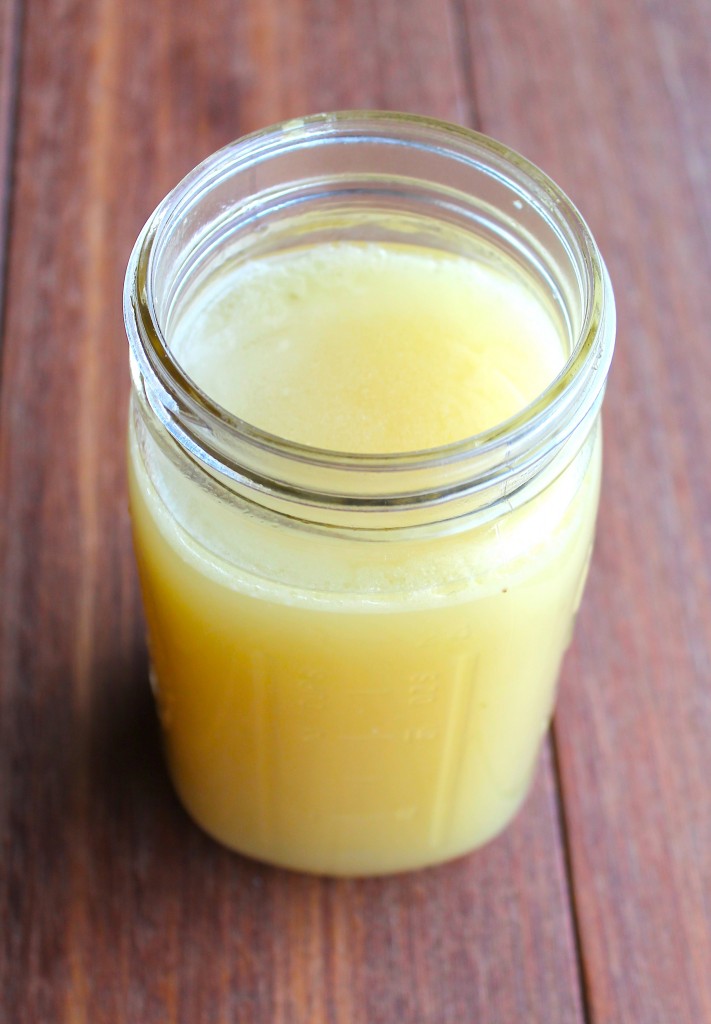 How I Make Bone Broth

Once I got a lot of that type of feedback, I realized I had to write up a little tutorial. Everyone should get perfectly gelled broth every time they make it. Broth is a right, not a privilege! Maybe I’m being dramatic.

Please note that while there is a recipe below with actual measurements and instructions, I hope that you use it as a template. If you follow the general set of guidelines, you should achieve broth perfection with the freedom to make it your own.

I use a pressure cooker. I highly recommend purchasing one. Links to options are below.  If you aren’t interested in using a pressure cooker, the following recipe can still be used. You’ll just be simmering your broth for up to 24 hours instead or 1-2. Not a problem if you’re more patient than I am.

I make my bone broth in 2 phases: the bone phase and the veggie phase. This makes the process a bit longer, but it’s worth it. I do this for two reasons:

As far as what kind of bones: the ones with joints are best; knuckle bones are good, as are chicken backs and necks. Wings are also a good option. You can save your bones from when you make chicken and use those as well. Get the best quality you can- grass fed beef and pastured chicken if you can. You want healthy bones for your broth!

Into my pressure cooker go several pounds bones; beef, lamb, or chicken. I fill the pot about half way with bones and cover with water by a few inches. 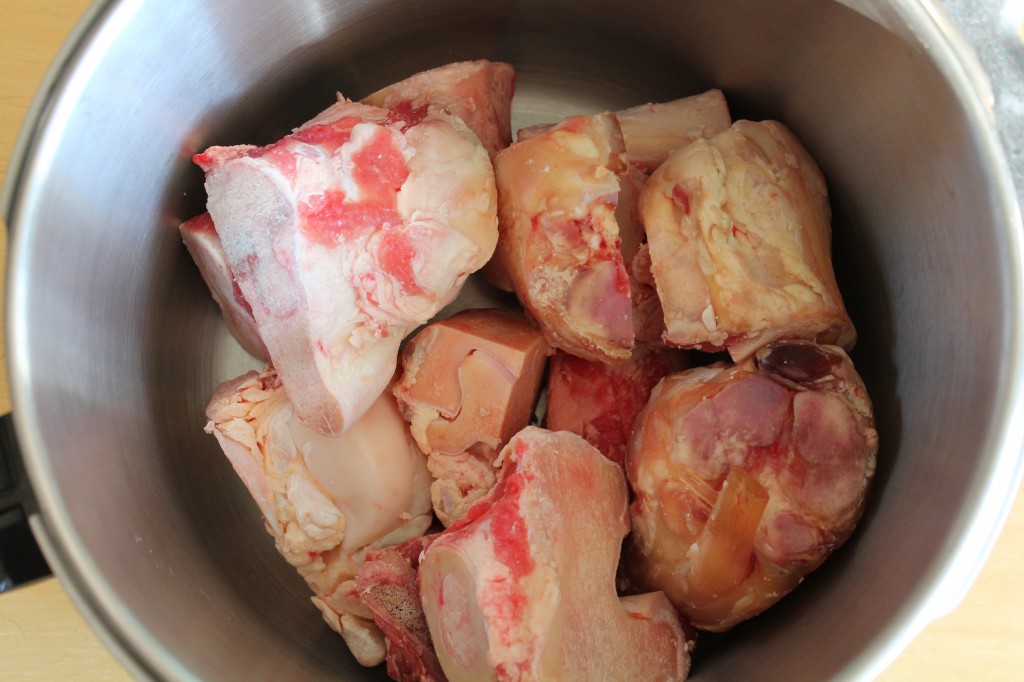 See that line inside the pressure cooker that says MAX? Respect that. I bring my water line a bit below, just to be safe. 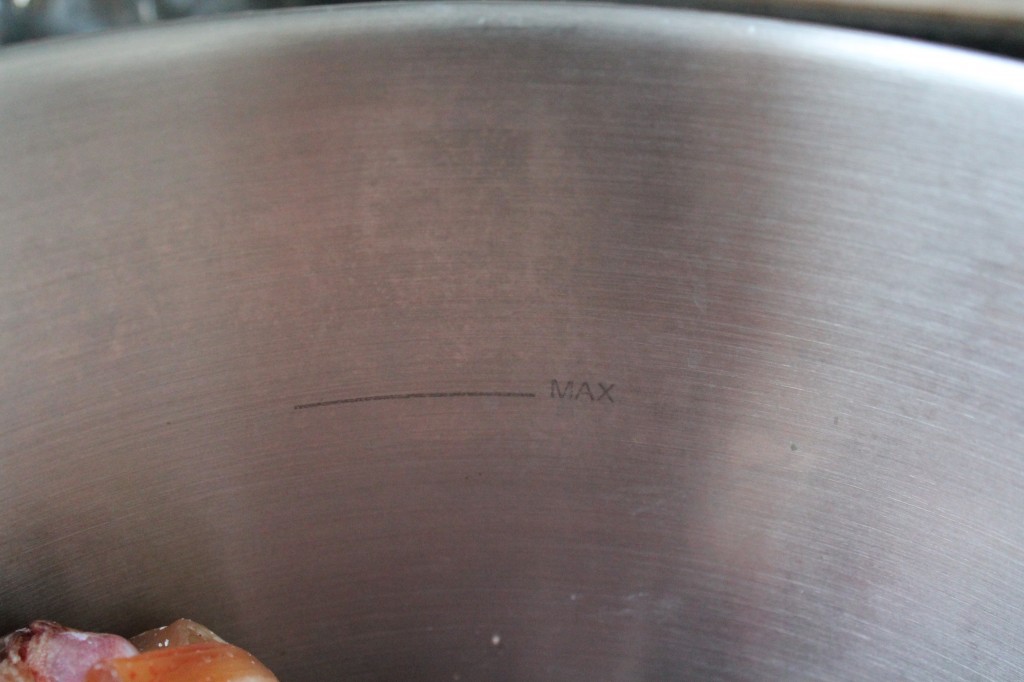 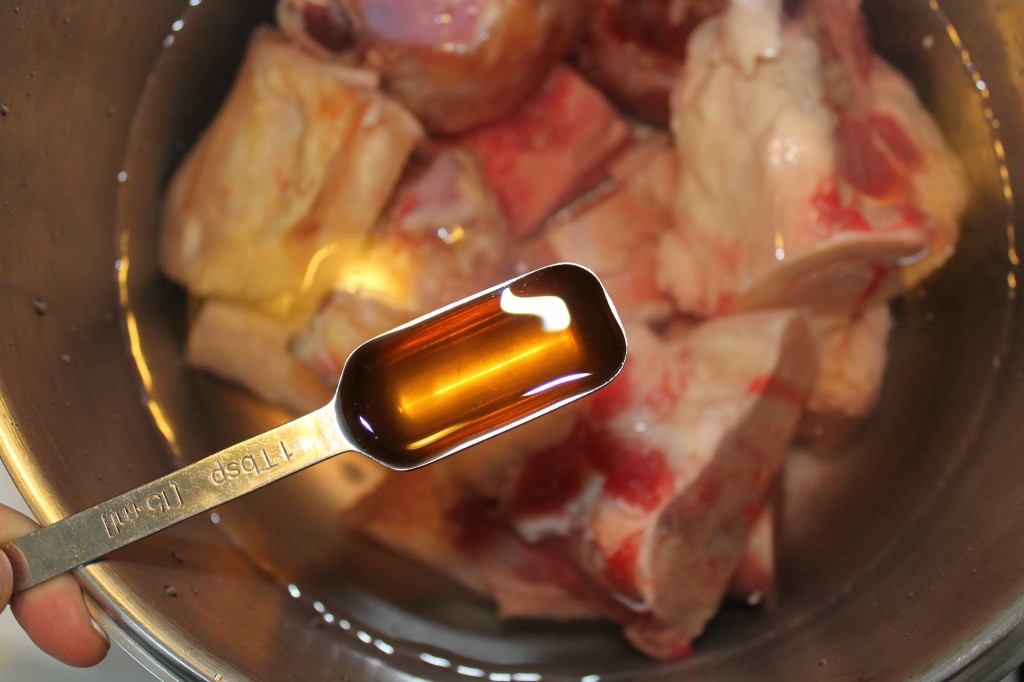 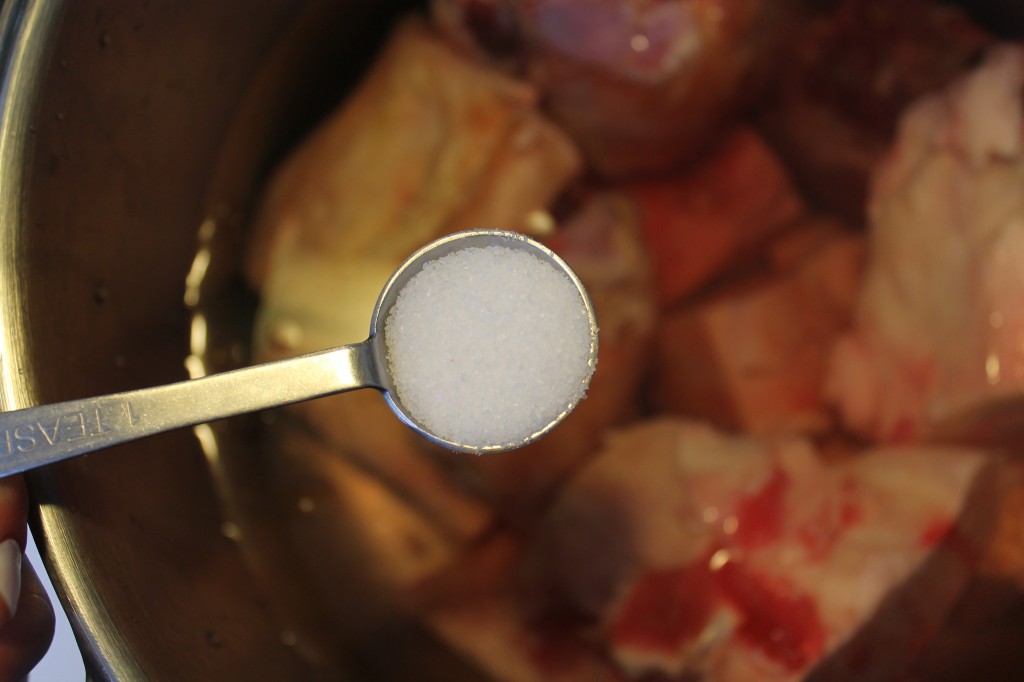 Throw in some peppercorns too! And then it’s time to let the stars of the show do their thing. Cook according to the instructions below, depending on the bones and method you’re using.

After that: Time for phase 2. Add your veggies. These don’t have to be beautiful, in fact, they shouldn’t be. Save your scraps and freeze them- they’re perfect for broth making. I like lots of root vegetables like carrots, parsnips and celery root. I also add an onion, cut in quarters, (you don’t have to peel it), some garlic cloves, and some herbs.

Remember, this isn’t an exact recipe. You can add anything that you’d like the flavor of in your broth. I do, however, recommend keeping it somewhat simple.

Add your veggies, and turn the heat back up to high. Once it comes to a boil, turn it down so it stays at a good simmer. Let the broth reduce for at least an hour. 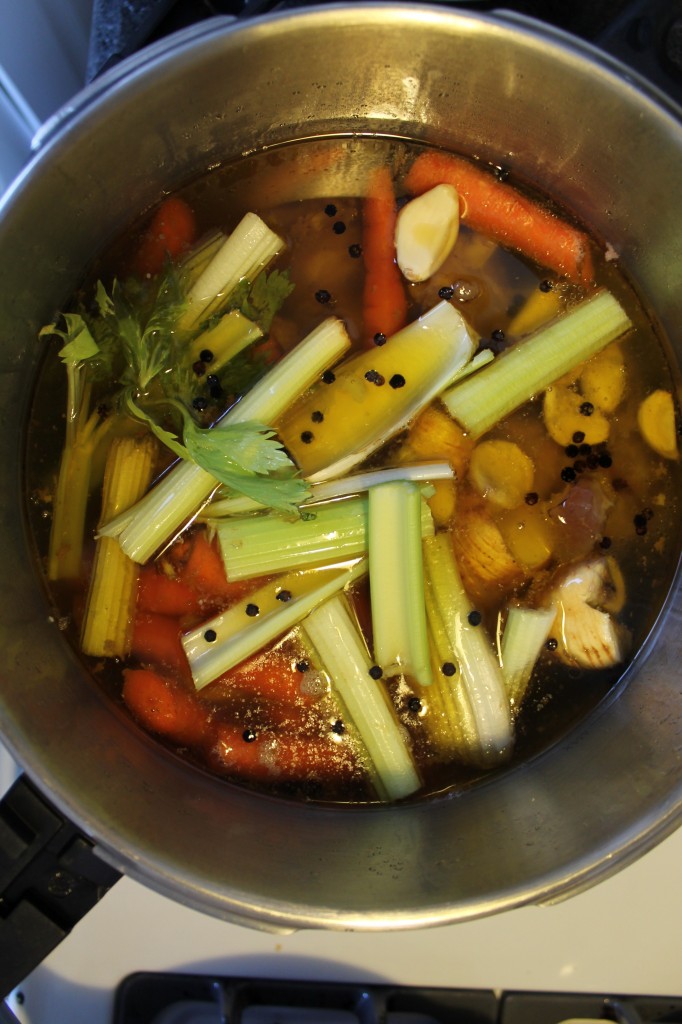 Strain the broth over another large pot with a strainer in it. Squish the contents of the strainer with a wooden spoon or ladle so you get as much juice out of it as possible. You can save the carrots or any other veggies you want to add back in for soup.

Transfer the broth to glass jars or containers and chill in the fridge. The fat will be easy to remove once the broth is cold.

If you want to be a showoff, Turn your broth out onto a cutting board and cut it with a knife. Why? Just because you can. 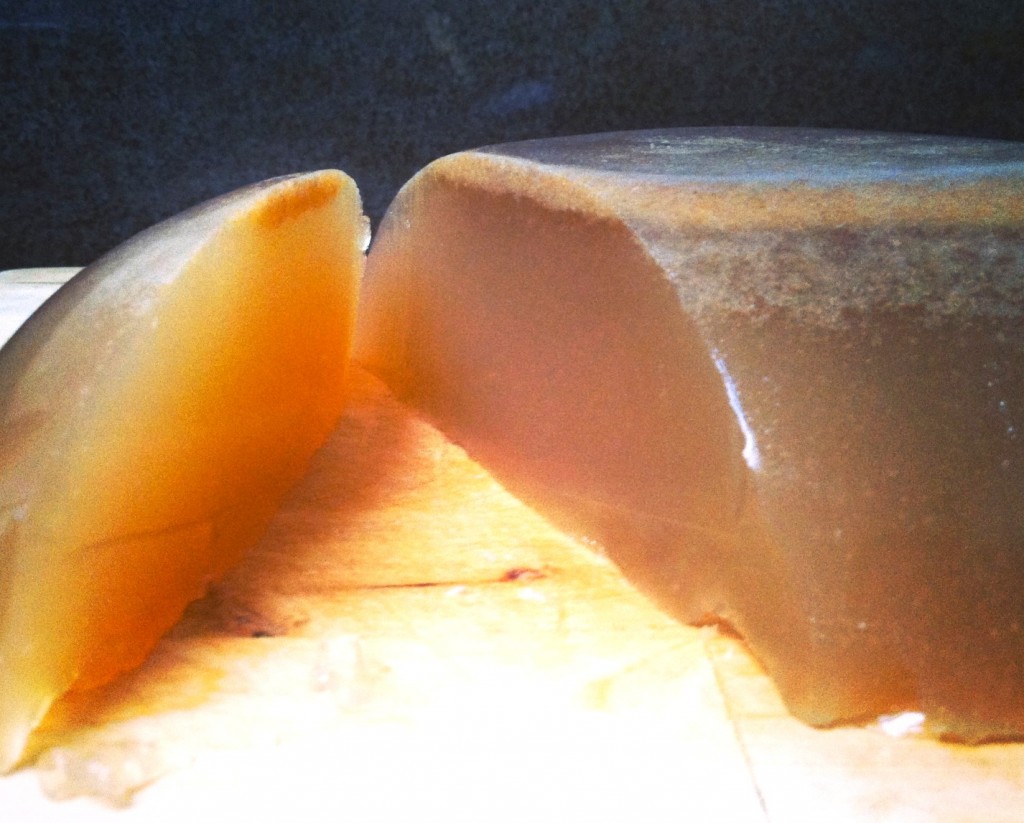 So there you have it; how I make bone broth. I hope it results in broth perfection for you.

How to pick the size? If you plan on making lots of bone broth, I recommend the 8 quart, but you can still make a good batch of concentrated broth in the 6 quart.

Rather kick it old school and get a stove top pressure cooker? Here’s a great 6 quart one and the same model in the 10 quart version. 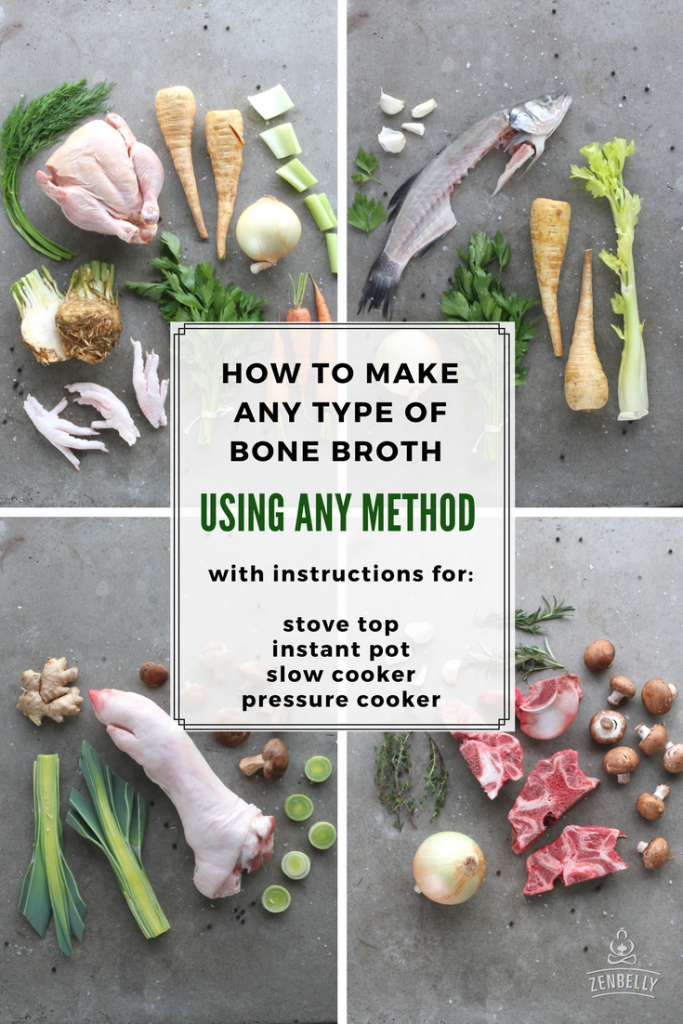 And if you want super specific recipes for all sorts of broth, you’ll find them all in my cookbook; Paleo Soups & Stews!

use this basic method to make any type of broth.

If using a stock pot:

If using a pressure cooker / Instant Pot or other multi-cooker

If using a slow cooker:

« Cioppino: the real San Francisco treat, if you ask me.
French Onion Brisket with Porcini Mushrooms » 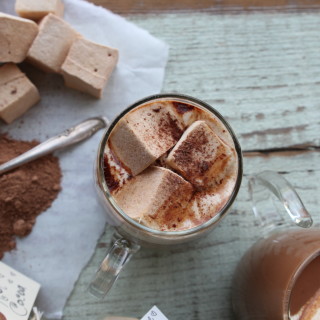 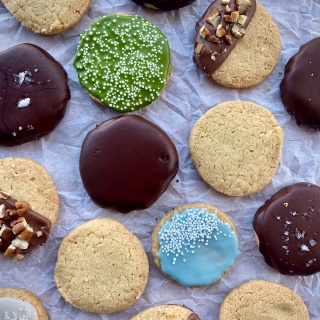 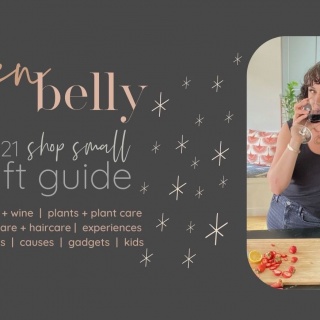 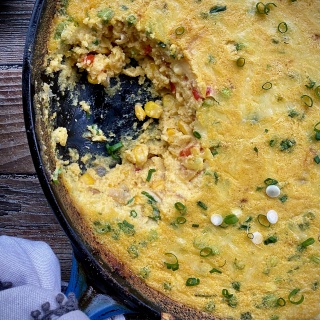 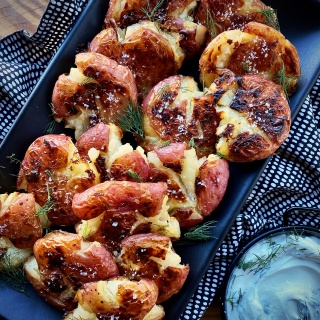